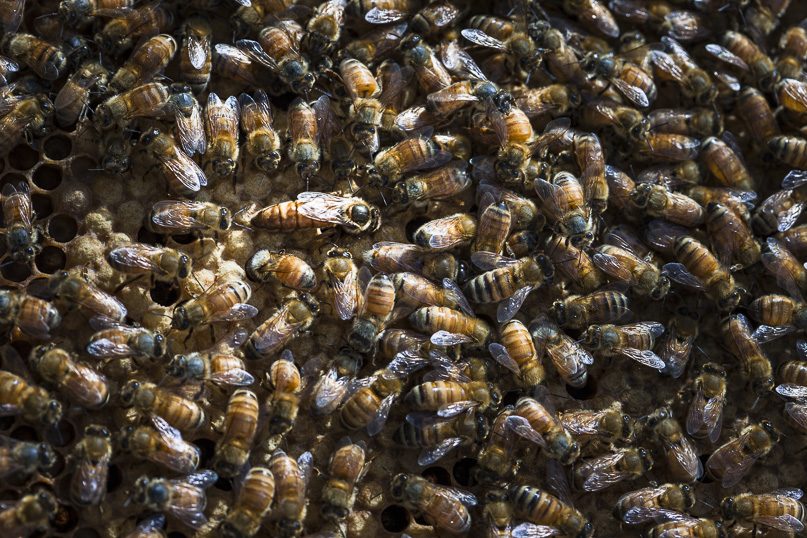 The Honey Bee and Our Food Security

Not only in the sense that there are an amazing variety of flavours to sample, but more importantly (for this article) in that we need food to survive.

About ten years ago was when we learned that much of the world was suffering a serious collapse in honey bee colonies (known as colony collapse disorder). We were also seeing a considerable reduction in the populations of wild bees. As bees are responsible for the pollination of over one-third of the plants we eat, this flagged a major concern for long-term food security around the world.

The End of the World is Nigh

Imagine a world without many of the fruits we have easy access to today. No apples, pears, melons, cherries, or peaches. There would be no avocados, or tomatoes, or many type of berries. No cashews, macadamias, or almonds. Grapes would have greater difficulty with pollination which means (end of the world) less wine!

Even plant varieties that can also be pollinated by other insect varieties would have much more limited production. This would affect (also end of the world depending upon your preferences) chocolate, coffee, and tea production. In many areas dairy would be restricted as cows are fed on lucerne (alfalfa) or clover, which are species which requires honey bee pollination. And add to this the vast numbers of non-food flowering plant and tree species that are reliant on bees for reproduction.

There is a quote, oft mis-attributed to Einstein that is;

“If the honey bee disappeared off the surface of the globe then man would only have four years of life left. No more bees, no more pollination, no more plants, no more animals, no more man.”

Whilst the situation is perhaps not quite that dire, if the bees were to disappear you can see that it would be a dramatically different world we would be living in. For certain there would be much reduced yields on crops, and more misshapen fruit meaning greater wastage.

Now for the good news! Since the recognition of what was happening, much research and study has been done to understand the reasons behind the collapse of bee colonies. Many countries have developed systems for monitoring the health of honey bee colonies. Whilst there is still a long way to go, we now have a greater understanding of the causes, and what can be done to support our friends, the bees.

Our current understanding of the failure of bee colonies is based upon the complex interaction of “sublethal stressors” that affect a bee’s foraging abilities. These are factors which limit or interfere with a bee’s ability to collect food over quite large distances, and return it to the hive. Individually these factors do not kill bees, however combinations of these stressors can lead a colony to collapse.

Some of the current known stressors for bees are;

What Can We Do?

On the larger scale Government, Industry, and Community need to work together to improve the environments in which bees thrive.

On the positive side, because of the numerous factors involved, there are a number of simple and easy actions that can be taken to assist. These include;

In Australia we are actually quite lucky. Our large areas of bushland and forest provide uncontaminated access to bee food sources (try some varietal honey from these). Additionally as noted above, our quarantine biosecurity laws have restricted the numbers of pests endangering our bees. Despite this, further work still needs to be done to protect both our native and domestic bee colonies.

If you would like to assist with protecting our bees – please make donations to www.wheenbeefoundation.org.au

About the Author: Benjamin Townsend