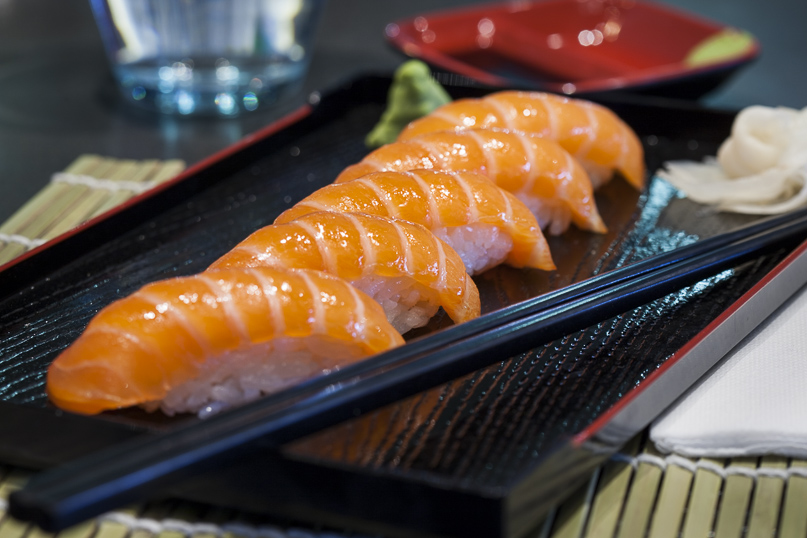 While sushi remains a mystery to the uninitiated, those in the know, can appreciate it. But even the most avid fans do not realise there is a more correct way to dine on this cultural feast. And while you won’t be cast from your local Japanese eatery for mistreating your food, knowing how to eat sushi the correct way will enhance the overall experience of the artistic meal and its cultural history.

Serious chefs consider making sushi an art that takes years to master. So eating sushi a certain way shows you respects their effort. You should address your sushi chef only when necessary, and ask what he recommends. He knows his menu better than anyone, and will reward your trust in him.
That being said, never distract the chef later with small talk, they are artists and wield a sharp knives, let them work to keep their fingers!
If it is the best sushi you ever had, you can even offer to buy the chef a shot of sake. If he accepts, you should have one with him. Never attempt to hand money to the chef, they work with raw fish all day and should never touch money.

First you should have super clean hands and have some knowledge of how to use chopsticks. The correct way to eat sushi is with your fingers. Chopsticks are typically only used to eat sashimi (raw slices of fish).
Then pour a minuscule amount of soy sauce into the dipping bowl (you can always add more later if needed). Wasting soy sauce is taboo in serious Japanese dining etiquette.
When not eating with your chopsticks, you should put them on the holder beside your plate, tidy and parallel to the table, rather than on the plate or your dipping bowl. Leaving your chopsticks anywhere else may indicate that you are finished eating.

Know how to use the Wasabi and Ginger

Believe it or not, no matter how much you enjoy the burn, turning your soy sauce into a cloudy mess by mixing in wasabi is not the proper way to eat sushi. Traditionally the chef will have already added small amounts of wasabi to each piece, based upon the type of fish, to bring out flavours.
Most sushi eateries will provide additional wasabi to accommodate people with spicy interests, however, adding too much wasabi in front of the chef not only hides the natural taste of the fish, it’s akin to dumping ketchup all over a perfect cut of beef in an expensive restaurant!
If you have to add wasabi, brush some onto the fish with either your chopstick or a piece of ginger. Don’t leave the ginger on top of the sushi as an enhancement! Sucking the extra wasabi off of your chopsticks is also considered bad form.
Fresh ginger is provided to cleanse your pallet between bites and should never be eaten at the same time with a piece of sushi.

Want to try fresh wasabi in Australia, believe or not it is produced in Tasmania from a wasabi farm.

How to Eat Sushi the Right Way

Fortunately, there are no guidelines to the order of which type of sushi you eat. If you particularly enjoy a certain type, ask for another piece.
Sashimi — a slice of raw fish with no rice — is typically eaten with chopsticks, but the traditional way to eat sushi is by lifting a piece between your thumb and middle finger. Picking up the sushi with the fingers allows you to feel the texture and helps to keep it together, rather than damaging it with wooden sticks. Regardless, you’ll be forgiven for using chopsticks. The only time that mixing wasabi into your soy sauce is acceptable is when you will only be eating sashimi.
Nigiri, a slice of fish squeezed atop a strip of rice, should be turned upside down by rotating it counter clockwise, then dip only the fish into your soy sauce, never the rice. Not only will the rice absorb too much soy sauce and change the texture of the bite, leaving rice behind in your bowl is amateur, (preparing the vinegared rice properly is also part of the sushi art).
Sushi pieces such as unagi (eel) and those with sauce already on top should not be dipped.
To really appreciate sushi, pieces should be placed in your mouth upside down so that the fish is against your tongue. Allow your tongue to experience the range of flavours before processing your bite.

Sushi originated outside of japan, although the Japanese get full credit for what we call sushi today, the inspiration for sushi is thought to have started in Southeast Asia. Nare-zushi, fermented fish wrapped in sour rice, originated somewhere around the Mekong River before spreading into China and ultimately Japan. The concept of modern-day sushi was invented in Japan by Hanaya Yohei sometime around the end of the Edo period.

Sushi caught on originally as a cheap, quick snack to eat with the hands while enjoying a theatre performance.

Your wasabi is probably not real wasabi. Real wasabi comes from the root of the wasabia japonica plant, not horseradish. The powerful burn of wasabi comes from naturally antimicrobial chemicals in the plant, the perfect complement for consuming raw seafood which may contain parasites.
Authentic wasabi is pricey. The stuff typically provided in sushi restaurants is made from horseradish and mustard powder, then dyed green with artificial dyes to resemble real wasabi.

Originally, sushi rice was never eaten, sour fermenting rice was wrapped around fermenting fish only to aid in the process of creating umami — a unique, sour taste. Once the fermentation process was complete, the rice was discarded and only the fish consumed.

Nori, the seaweed used to wrap sushi, was once scraped off of wooden pier legs and even boats, then pressed into sheets and dried in the sun. Today, nori is cultivated and farmed. Western brands toast nori for safety reasons while many Japanese brands do not.

If the type of sushi precedes the word, sushi mutates to zushi. For instance, maki is maki-zushi; nigiri is nigiri-zushi.

Fugu, or pufferfish, contain lethal amounts of poison in glands and organs. If a chef inadvertently scrapes one with a knife while preparing sashimi, he could potential kill his own customer. To be certified to work with fugu sashimi, chefs in Japan must undergo a rigorous training and certification process — then eat their own finished product! And yes, there have been deaths during the final exams. For centuries, the only law pertaining to the Emperor of Japan is that he can never eat fugu because of the risk involved.

Forget the standard ‘Californian roll’ found at any cheap sushi outlet. The ingredients for maki-zushi — sushi rolls — are chosen by masters so that taste, texture, and even colours complement each other. Rolls are served already sliced into disks so that customers can see the artistic work inside.

Maki-zushi gets its name from the mat. The bamboo mat that gives sushi rolls their cylindrical shape is called a makisu in Japanese. While sushi rolls are the most popular form of sushi in the West, the Japanese typically prefer nigiri — a piece of fish pressed on top of a strip of rice by hand.

Maki-zushi isn’t always rolled in seaweed, although we are most familiar with sushi wrapped in black nori (seaweed), in Japan sometimes maki-zushi is wrapped in soy paper, cucumber, or egg.