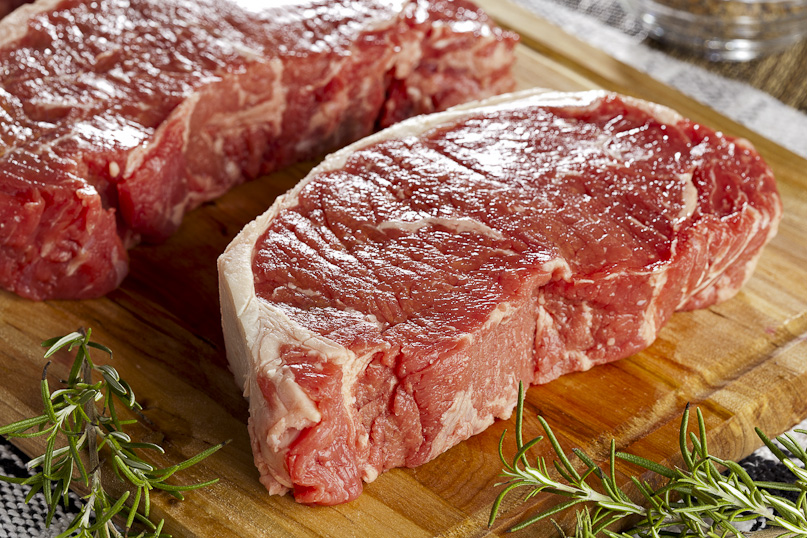 Home » How to » Choosing the Right Cut Of Beef For Your...

Choosing the Right Cut Of Beef For Your Steak

How to Choose the Right Cut of Beef for Your Steak

Secrets to a great steak begin with the selection of the beef.

Most people are often at a lost when it comes to choosing beef for their steak. Many make the common mistake of going to the Supermarkets and simply choosing any cut of meat. When they get it home and cook it as a normal piece of steak, they find it tough and chewy and generally unsatisfying.

Understanding the cuts of beef is very important as each requires different ways of cooking. Certain parts of beef are more tender and only require quick cooking methods. Some are tougher and are more suited to long and slow cooking methods.

Not all cuts of beef make good steaks. Cuts like the Chuck and Brisket are rather tough and are best prepared using a slow and moist cooking method like braising. Generally, cuts along the backbone of the cattle are relatively tender and commonly selected for making steaks.

Filet Mignon is a steak cut from the Tenderloin of a beef cattle. It is also referred to as a Tenderloin or Chateaubriand steak.

The tenderloin muscle is located along the inner part of the cattle’s backbone, on the lower region of the spine. It is one of the least exercised muscle, thus the tenderloin is often considered the most tender cut of beef. It is relatively lean and has very little fatty tissues.

There is only two relatively small pieces of tenderloin muscle in every beef cattle. The tenderloin is thus highly prized and often sought after by gourmet chefs and renowned restaurants.

Tenderloins have a very mild flavour that often responds well to sauces, without overpowering the flavour of the sauce. In the hands of a skilful chef, the tenderloin can be transformed into extremely tender and juicy filet mignons steaks.

Ribeye comes from the rib section along the upper part of the cattle’s backbone, closer to the shoulder. It consists of three major muscles.

Ribeye has a vein of intermuscular fat running through it. This layer of fat is greatly savored by Steak Connoisseurs. When correctly cooked at high temperature, the fat and interconnective tissues break down and melt. This keeps the meat moist and gives it a wonderfully intense flavour.

Ribeye is highly rated due to the right amount of fatty tissues it has. They are more flavoursome than Tenderloins and as a result tend to be more appealing to steak lovers. Good quality Ribeyes can sometimes come with a hefty price tag.

The meat of the striploin is actually a continuation of the ribeye muscle group. It is also commonly referred to as Toploin. It is the end part of the Ribeye muscle group closer to the waist of the cattle.

As with ribeye, this cut is available in two main styles;

Meat from this part also make great steaks. It is still reasonably tender, though does not have the vein of fat running through it like in the Ribeye. It is thus unable to surpass the latter in terms of flavour. It does however have a layer of fat on its outer edge.

Striploin is commonly referred to by many names, such as;

Porterhouse Steak is anatomically the same as a T-Bone. It is cut lower down the spine thus has a bigger proportion of the Tenderloin muscle.

Sirloin is cut from the hip section of cattle. Diners will often find cross-sections of the hip bone within their steak. Sirloin is less tender than the Striploin but has a slightly stronger flavour. It is affordable and a good choice for barbeques.

Cut from the rump of the cattle. Traditionally, this part is more often used for roasting, and is now popular being flame grilled.

Cut from the thigh of the cattle. The meat is lean with minimal fat and marbling. This cut is more suited to slow cooking methods such as roasting or braising. It needs to be tenderized when making steaks.

Long and flat, it is one of the most affordable steaks on the market. It is however substantially tough, and therefore many flank recipes require marinades or moist cooking methods such as braising.

We hope this helps you the next time you are selecting a cut of beef. Keeping these points in mind will aid you in getting the most flavour from your meat.